Historic number of Hmong candidates running for office in Minnesota 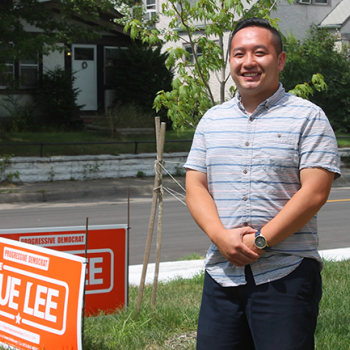 A record number of Hmong candidates are running for office in November’s election, and it’s generating excitement for Minnesota’s largest Asian-American community.

Nine Hmong-American candidates have advanced through the primary and will be on ballots throughout the metro in November. Six candidates are running for state representative, including State Representative Fue Lee, a DFLer who is running for re-election in District 59A, which covers much of north Minneapolis. In addition, there are two candidates running for Ramsey County judge and one for Hennepin County commissioner.

“It’s a very exciting time for Minnesota as a whole,” says Sia Her, Executive Director of the State Council of Asian Pacific Minnesotans. “It would be historic, because this would be the first time that Minnesota would have an Asian-American delegation of that size. That fills not only the mind but fills the heart. It’s one of the signals of a community coming of age in this state and in this country.”

The area’s Hmong-American community is expected to respond by showing up in significant numbers at the polling stations in November. Overall, “whenever there is a Hmong candidate running, there seems to be a spike in terms of voter turnout,” says Bao Vang, Executive Director and CEO of Hmong American Partnership (HAP), the Hmong-led nonprofit that serves 18 predominantly Southeast Asian nationalities and 22 languages within the Twin Cities. “We do a lot of voter education because our community is young,” said Vang.

As in past recent elections, HAP is involved in a large get-out-the-vote campaign. HAP’s database now comprises some 20,000 voters, says Vang, and on November 6th, the organization plans to coordinate several hundred volunteers to work as interpreters and poll watchers and to provide transportation to voters.

Vang says there is “a lot of energy around insuring that we elect a government that represents an interest in core issues that impact community,” among them: educational equity, workforce development, affordable healthcare and affordable housing.

Those issues align with the priorities of another group: Maiv PAC (pronounced “my pac”), a nonpartisan PAC started in 2016 to support Hmong-American women in Minnesota. “Often times people want our vote but they don’t want us to be informed voters,” commented founding member KaYing Yang.

As they fundraise, Yang says the volunteer members of Maiv PAC work to educate the community on ways to be politically engaged, beyond simply voting. They encourage voters to follow candidates and know their stances on issues. Maiv PAC has also organized precinct caucus training to increase the number of Hmong delegates to caucuses.

Yang says Maiv PAC was founded because they noticed many Hmong women played instrumental roles in getting others elected through their work on various campaigns, and the group wanted to “harness that collective power.”

Maiv PAC has endorsed some twenty candidates, including all Hmong candidates running at the state level. Yang says they are looking to see more investment in small businesses in the community, citing the number of Hmong small-business owners who contribute the state economy. In education, the goal is to close the achievement gap for Hmong students and to ensure that they graduate college- and career-ready. Immigrant rights are also an important value, says Yang, adding “we came as refugees, so we can’t abandon that.”

This article originally appeared on the MinnPost website. You can view the article on their website at the following link:
https://www.minnpost.com/new-americans/2018/10/historic-number-of-hmong-candidates-running-for-office-in-minnesota/